The Guelph Jazz Festival extends heartfelt thanks and congratulations to Julie Hastings, who is retiring from her role as Director of Operations after twenty-four years with the organisation. In 1995, Julie got involved in the second year of the fledgling festival as a volunteer to help hang posters around the city, and her involvement in the festival grew in tandem with the event itself. During her tenure, she worked alongside founding Artistic Director Ajay Heble, whose vision she complemented and supported as the festival emerged as a renowned international event.

Along the way, as the festival presented more and more of the most celebrated figures in the field of creative improvised music, and in no small part due to Julie’s dedicated work, the Guelph Jazz Festival was awarded the Premier’s Award for Excellence in the Arts in 2010, among other prizes. Throughout, Julie guided the organisation’s administration with an ironclad commitment to both the festival’s artists and the community.

Artistic Director Scott Thomson stated in the 2018 festival print program: “[O]ur irreplaceable Director of Operations, Julie Hastings, deserves special accolades. She has been with the festival practically since its inception, and oversees virtually all aspects with skill, focus, and enthusiasm. So, it is bittersweet that this festival will be Julie’s last, as she announces her well-deserved retirement. In the spirit of gratitude and celebration, I dedicate the 25thAnniversary Guelph Jazz Festival to her.”

To fill the considerable gap that Julie’s retirement is leaving, Scott will take on additional responsibilities as Artistic and General Director. Furthermore, as announced in the last newsletter, he will share both programming and administrative responsibilities with Karen Ng, who steps into the newly created position of Assistant Artistic and General Director.

The Guelph Jazz Festival wishes Julie every much joy and adventure in this new chapter of her life! 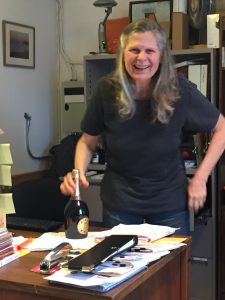