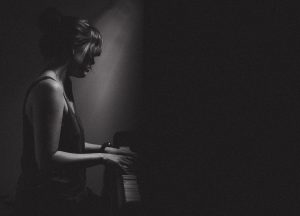 Nina Lynn grew up in Streetsville, Ontario, with the early influences of Joni Mitchell and Kate Bush.  She began playing the piano at the age of 6 and went on to study singing, the flute and guitar. As a teenager she attended a high school for the arts as a music major and at 14 began composing her own songs. Although primarily grounded in folk, her music has developed over the years to include jazz and blues. Nina recently released a new album, 2am Kinda Night, produced by Rick Hutt at Cedartree Recording Studio.  She is currently playing select shows in Ontario and working on new material in her home studio in Guelph.