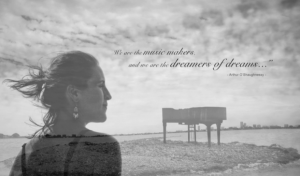 Olga was born in South Africa and has been playing piano since the age of six. Classically trained, she obtained all the Unisa examinations including grade 8 which she completed with honours. She is passionate about music, especially when embracing the piano, which truly is the instrument closest to her heart. Since her childhood, Olga has been greatly influenced and inspired by the romantic composers from the 19th and 20th century of which her favourites are Chopin, Debussy and Rachmaninov. Her style can be called melodic with a touch of nostalgia – taking the listener on a mesmerizing sound journey. Olga portrays and improvises both contemporary and older classic melodies – giving her ballads a fresh interpretation and identity…a new touch. For years she has performed at various establishments in South Africa including hosting open air music concerts while collaborating with vocalists and other instrumentalists. Her presence when entertaining is often called unique and refreshing as she also will add her voice to some of her selections. Listen to some songs in her repertoire.