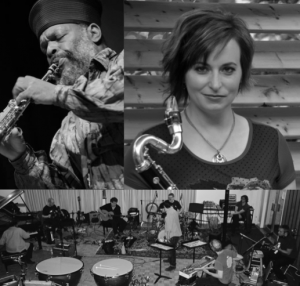 Called an “an unclassifiable blast of fresh air” by the Montreal Mirror, with their album Hold True (Accroche-toi) chosen as one of the top ten offerings in 2010, the music of the Vertical Squirrels is group-improvised, live in the moment, and draws on a potent mixture of free jazz and post rock sensibilities with nods to Indian ragas, jazz-inflected minimalism, Zappa-esque bouts of sonic anarchy, and German rock music from the 1970s.

Douglas Ewart: A composer, improviser, sculptor and maker of masks and instruments, Douglas R. Ewart is also an educator, lecturer, arts organization consultant and all around visionary. In projects done in diverse media throughout an award-winning and widely-acclaimed 40-year career, Mr. Ewart has woven his remarkably broad gifts into a single sensibility that encourages and celebrates–as an antidote to the divisions and compartmentalization afflicting modern life-the wholeness of individuals in culturally active communities.

Kathryn is heavily involved in both educational and creative work. She is currently the Artistic Director of NUMUS concerts, the Director of ICE (Improvisation Concerts Ensemble) and instructor of improvisation studio at Wilfrid Laurier University, and the bass clarinet instructor at the University of Waterloo. As an enthusiast of improvisation in the classroom and bass clarinet repertoire, she has guest lectured in university classes and conducted workshops across Canada for both teachers and students. Additionally, Kathryn has been a guest speaker and performer at various conferences such as the 2004 World Bass Clarinet Convention, 2013 Summit on Improvisation Pedagogy and Community Impact in Guelph, the 2014 McGill University Music Graduate Symposium, the 2014 International Society for Improvised Music Conference in New York City, and the 2015 Guelph Jazz Festival Colloquium.