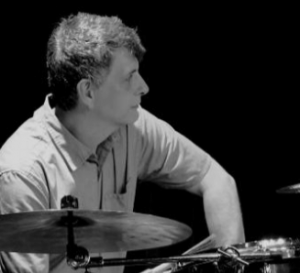 Dave O’Neill has been performing and teaching for over 25 years, and enamoured with music all his life. His interest in music and the drums began at a very young age. Typically, he would bang on any surface or use his voice; essentially beatboxing in 1972. O’Neill didn’t acquire his first set of drums until the age of 12, and it was one of the greatest moments in his life. At 16, he lost his fingers and half of his palm on his right hand in a workplace accident; the worst moment in his life. But, being young, resilient, and naive, he set out to overcome the loss and to continue to play as a one handed drummer, or more accurately, a “one and a half handed drummer”. Through trial and error and the help of good people (family, Ernie Porthouse, Bill Nancekivell), O’Neill had a prosthesis that could hold a stick. Many years were spent making it work, practicing, refining, and just trying to get better (and he still is). He attended Mohawk College and graduated with a 3 year Diploma in Applied Music. Some years after graduation were spent traversing the country with various groups. In 1993, O’Neill decided to return to school and enrolled at the University of Toronto. He graduated with a degree in Jazz Performance and then attended Teachers College at OISE/U. of T., graduating in 1997. After graduation from Teachers College, he devoted himself to studying the vibraphone to satisfy his melodic and harmonic interests. The vibes just made sense in that regard, as he already had the prosthesis for sticks and brushes. A small modification allowed holding a vibraphone mallet as well. O’Neill uses a three mallet technique, two in his left hand and one in his right.